After having written about implementing a VGA controller in Verilog I wanted to improve it with a new functionality: the Text mode.

The Text mode is described in an excellent way by Wikipedia

It's not a difficult project but it's worth making. I start laying out the diagram of the controller:

The purple boxes are combinatorial logic realizing the translation between screen's coordinates and the memories addresses, the grey boxes instead are flip-flops intended to sync signals between the different internal blocks of the module: this will be explained later.

With respect to the previous VGA controller here we have two new elements: the ROM with the predefined glyph and the Text RAM containing the characters I want to display on screen. These are memories.

The hvsync_generator is pratically unchanged from the version of the previous post.

A memory is a device capable of storing and accessing data (you know, memory); usually are characterized by its address width and output width.

Since I'm using a spartan-6 FPGA I have access to some primitive useful to generate memories using the Core generator (here a guide: Spartan-6 FPGA Block RAM Resources).

For the ROM I have the following diagram

the clock (CLKA) signal is obvious, the other are the address line (ADDRA) and the output (DOUTA); the width of these lines are determined by the organization of the memory you need.

In my case I need the ROM to contain the data necessary to draw the pixel of a single character: I'll use 128 ASCII characters and each one will be represented with a 8x16 grid; in this way I need 16384 bits. Since I want to access the bits individually I configure the memory to be 16Kx1

Different story is the RAM: I need a read and write memory device that will contain an ASCII character index for each one of the block in which the screen is divided; being the size of each character be 8x16 we have, for a resolution of 640x480, 80 columns and 30 rows. 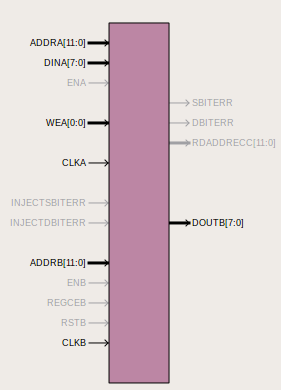 Since I need to write, there are two signal lines for that (DINA and ADDRB) that in this implementation will remain unused.

The idea here is that the value of the pixel is decided calculating in which \(column, row\) belongs: this can be determined using its coordinates \((x, y)\) with a division respectively by 8 and 16; in digital logic is simpler to take only the most significant bits of these signals:

Also here the multiplications by power of two are implemented with simpler left shifts.

To display characters I need obviously some of them; for this project I used the Unicode VGA font. This font is distributed using the BDF format.

This format is, simply put, a text format that descibes the geometry and the points forming the glyph

In order to be used into the Xilinx IDE, the glyph must be converted into a COE format, that is simply a binary representation of the words into the memory.

Since I didn't know any program that does that, I modified an existing program that converts BDF glyphs into C header files and added the option to dump in the needed format: the repo is here bdf2c but don't look at the code, is very ugly :P.

As final step I dumped the characters needed

and synthetized with the Xilinx tools the design.

The first attempt for this controller had some issues with timing, something like the situation described here.

Roughly speaking, every memory block needs one clock cycle to output the value it's storing, since we have two memories in series we need two clock cycles to obtain the pixel values to output on the screen. So the pixel data and the hsync and vsync signals are out of synch causing the character to be not aligned to the side of the screen.

Another connection that needs an explicit synchronization is the combinational logic that translates the screen's coordinates for the glyph ROM: as just said, only after one clock cycle the ASCII value is output from the text memory, so using directly the glyph coordinates derived from the screen ones gives you the wrong glyph data; this is the reason for the sequential always@(posedge clk) instruction.

I want to stress here that the approach chosen is to delay the signals out of synch in order to align it; this is accomplished using some flip flops.

but thanks to a chapter of "FPGA prototyping by Verilog examples" I realized that is simpler to "slow down" the signals; it's not probably a solution for all the use cases, but this particular one, where the signal data is generated continuosly, I think is a good situation.

By the way, the implementation of the delay uses the following block of code

inside the VGA module.

My advice, when some issue arises from a design, is to draw explicitely a diagram of the different blocks composing your system like my awesome™ hand-drawn scheme.

In this way you can see clearly the timing and connections. The best way however is to create a reliable testbench to test the design, but this is a topic for another day.

At the end it seems to work just fine :) If you are interested in the project, the source code can be found on github.