I left you with a cliffhanger in a post last year and now I'll continue the exploration in thce rabbit hole I entered since.

This is the problem I have to solve 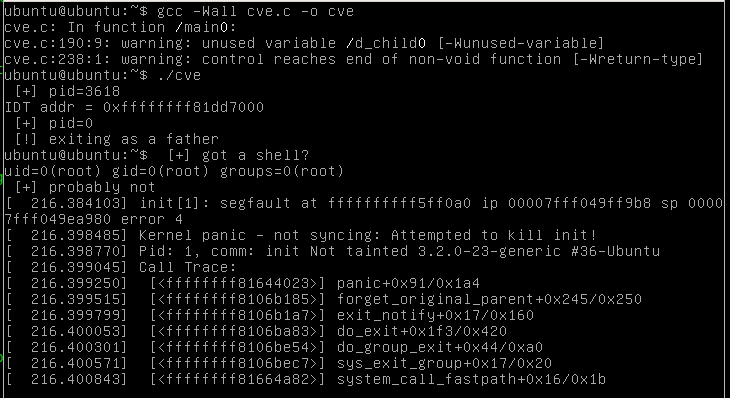 After analyzing a little more the stack trace, I observed that the panic is due to the init process being killed by a segfault: the same identic stack trace can be obtained issuing

from the same machine; this is very strange, the error is a normal segfault, a user-space signal, it shouldn't happen, I was expecting a kernel-space error!

Returning to gdb, this time debugging init itself, I discovered that the address that generates the fault (0xffffffffff5ff0a0) is in the virtual dynamic shared object (or vdso) that is pratically a virtual library that the kernel creates to provides quicker (unprivileged) syscalls.

Side note: they exist in the kernel some variables associated with each CPU that reference important data structures, one of this is the current_task, a specific task_struct that describes the running process the kernel is acting on; in the command above __per_cpu_offset is an array of offsets where the per-CPU variables are stored and current_task is the index inside such array where you can find the address of the current task. In newer kernel is possible to create an helper script for gdb enabling CONFIG_GDB_SCRIPTS that provides ready to use macro to obtain these kind of information, unfortunately it's not possible here.

By the way, during a debugging session I saw the following output: 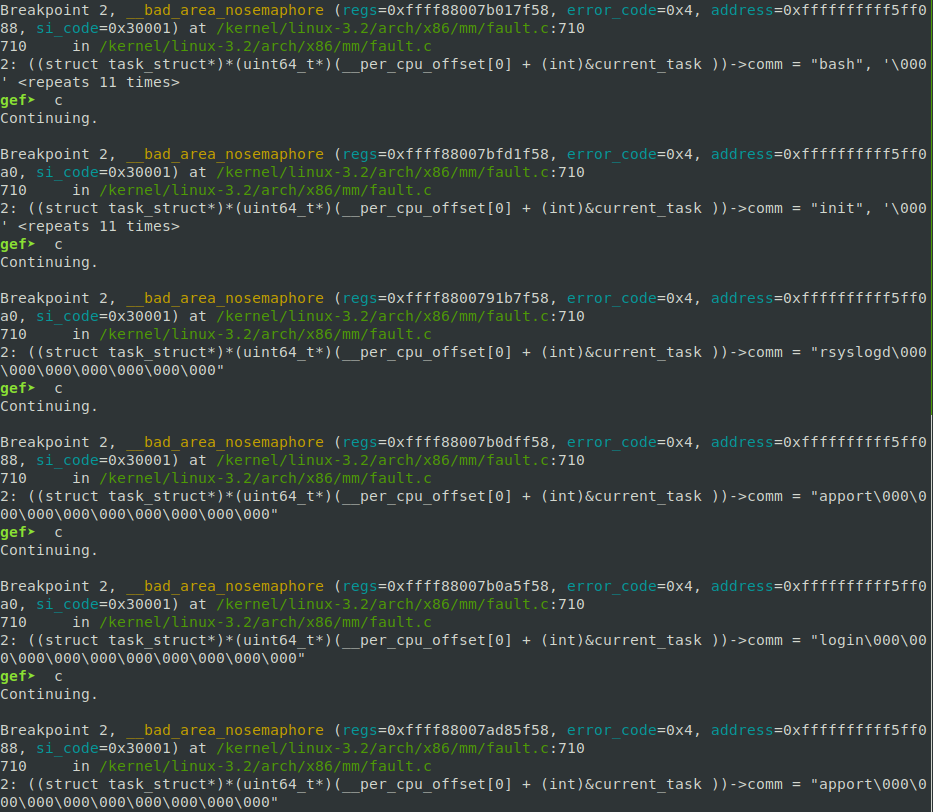 i.e. I discovered that also other processes are experiencing the same issue!

After a while I find out the reason of the crash: in the PoC, in order to overwrite an entry in the IDT, the stack pointer is moved to point to such entry! since we are calling other functions in kernel-space, the stack is used and is overwriting the stuff existing before the IDT.

I found out that before the IDT comes the bm_pte that seems related to fixed mapping (PTE stays for Page Table Entry).

If I try to print such variable before

and after the payload execution

we see that is pretty messed up! Oh boy, I was very dumb, probably the buildroot system hadn't crashed since the executables are all symbolic links to busybox that usually is statically linked (and without the need for the vdso).

So now I need to move the stack pointer to a safe memory area: my first tought was to move it to the user-space allocated buffer but bad enough it's not possible because being in user-space it triggers a double fault; the solution is to move it to the real kernel stack. Indeed the stack used for the kernel is thrown away at each context switch and it has a fixed dimension.

Using again the per-CPU variables (this time with the kernel_stack index) we can obtain the address of the kernel stack:

There is a last obstacle for a full exploit: I'm not able to gracefully make the main process waits for its children:

I tried experimenting with wait(), I tried reading the ptrace()'s man page but without success: it seems that the processes are restarted only when the father dies and I'm not sure it is an intended behaviour for ptrace() or a conseguence of the trap we used for the exploit. Probably would be necessary a third post :P

However it's possible to use the oldest trick in town: providing an input to the script via cat, maintaining the stdin open

If you want to take a look at the complete exploit you can search CVE-2014-4699 in my cve-cemetery repository on github.