A couple of years ago a friend of mine asked me to take a look at a pico projector that he had bricked during an update. He hadn't tried anything fancy or dangerous, he had simply used the internal functionality of the device. At that point in time the device was stuck in a bootloop with the Samsung logo as the only output from the projector.

I obviously accepted to take a look and in this way started a journey that lasted like five years where I learned a lot about hardware and software.

The device in question is the Samsung Pico Projector SP-H03, this is the product page; this item has been discontinued and from the few reviews I have seen it didn't do very well commercially.

The user manual doesn't talk about upgrading and it seems there isn't any post in the internet talking about some particular flashing mode for this device; I'm on my own to discover.

Opening the device is possible to unveil the internals: on top there is a PCB with SMD components on both the sides 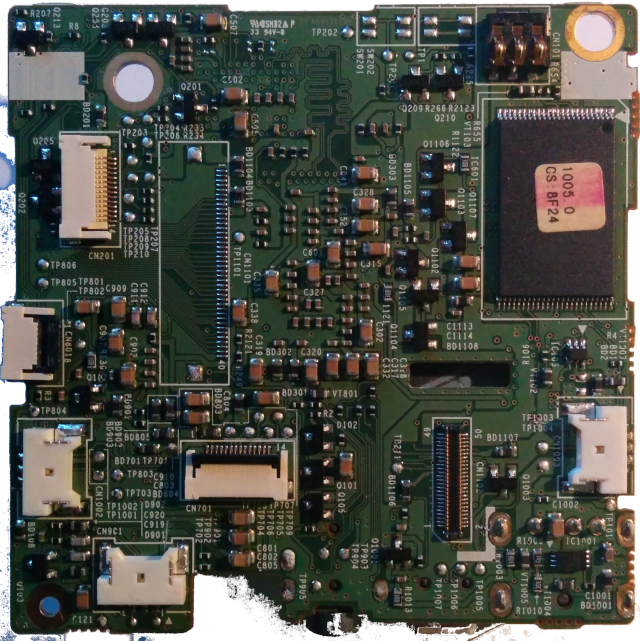 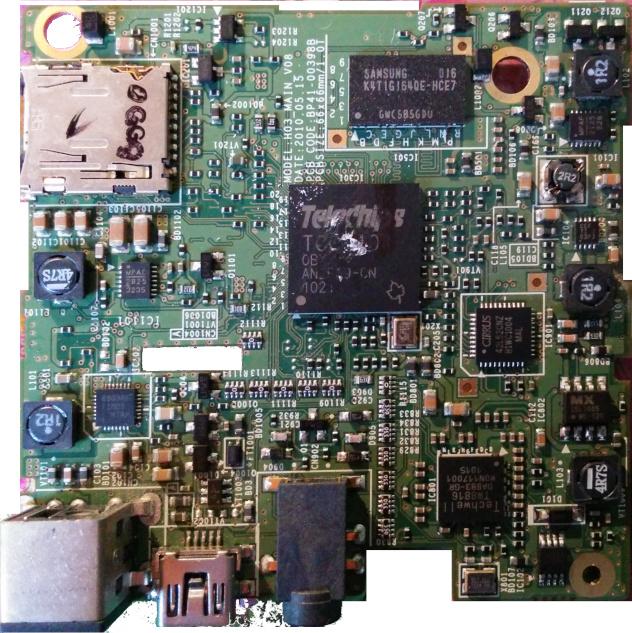 but no signs of a connector for the UART: indeed my idea throughout the investigation will be to discover the serial port and find out why the system doesn't work.

From the front image I found that the main chip for this box is the TCC9101, a pratically unknown SoC used in a couple of other devices and cited in the Wikipedia page about ARM SoCs as an ARM1176JZ(F)-S, i.e. an ARMv6 architecture. Take in mind that not even the company producing the chip, Telechips, has a page specific about this chip, only cited in a page.

Another thing available to look at is the firmware update that you can download from the official site: P-OBRNPWWC-1008.1.rom.

The most promising for further investigation are TCCKernel7.3.rom and TCCBoot4.2.rom

looking at the strings inside you can have some clues

So we can deduce that the board has as codename Oberon and that is based on the TCC89XX SoC.

This SoC has a little more information (by the way, a similar named SoC, the TCC8920, is a complete different ARM revision so I don't know what to think anymore about the naming convention used by Telechips) and indeed is possible to find a torrent containing a lot of leaked materials about this family of chips (f21b0242eac7f91090eaa949c699d2bc9252ca85 is the hash of such torrent); the datasheet is comprised in the leak.

With the datasheet in my hands I started to reversing the supposed bootloader contained in the firmware update, at first using radare2 but when ghidra has been officialy released I switched to it making easier the process.

The reversing was not strictly necessary for the process I'm describing but helped me to exercise with the assembly and to know better the peripherals available on the device. In particular after have done it I was sure that TCCBoot4.2.rom was really the bootloader.

The first problem to overcome was to understand the header and the address where the bootloader is loaded: the first thing was pretty simple since I discovered a repository containing the source code of such bootloader (it would not have been such hard to deduce the fields looking at them or via the code in the bootloader). 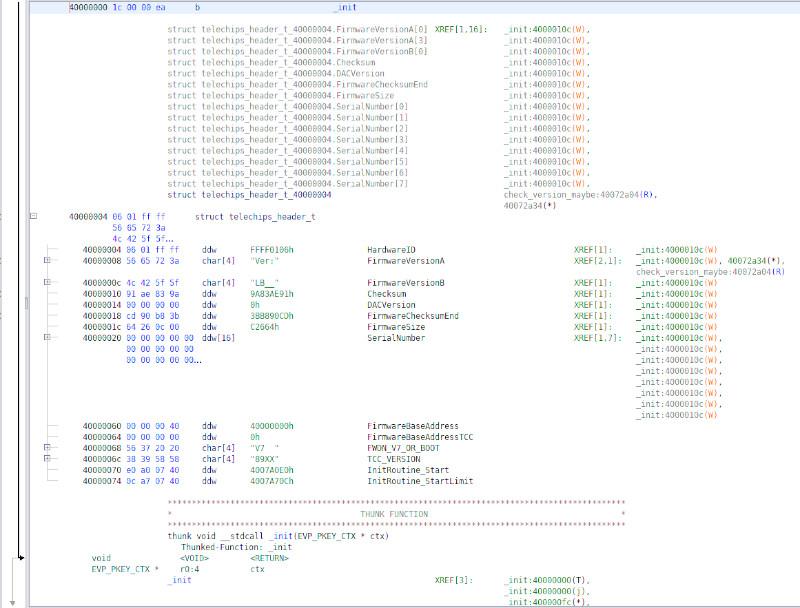 Looking at a few addresses called from the firmware was apparent that it loads at 0x40000000.

Knowing that, and the address mapping from the datasheet, I set the following in ghidra

that are not perfect but good enough to allow a decent reversing; part of the mapping reported in the datasheet is the following

moreover the peripherals memory space is partitioned like the following 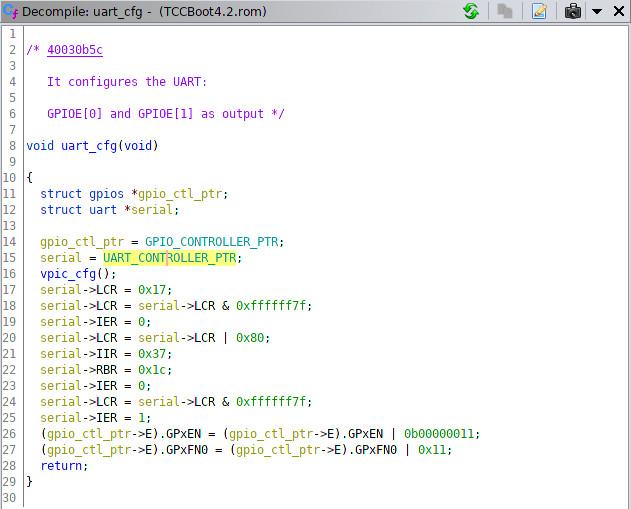 From the reading of several documents the presence of a USB update process seems pretty solid: in the datasheet itself is cited a so called USB boot mode that works in the following way

It's similar of what is described in the datasheet of TCC760 or that other people have found; it loads via the tcctool some code in SDRAM and executes it. 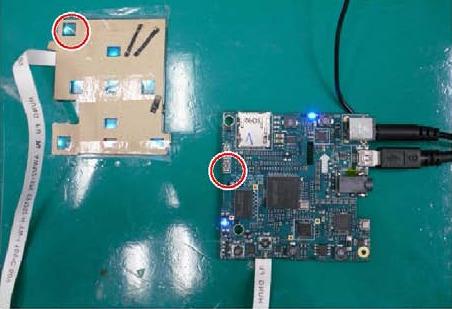 Another approach is to short the CE pin of the NAND. What you see is a new USB device

Modifing the code of tcctool, adding the correct VID:PID values and other minor modifications, I was able to execute code in the board and I started to write a piece of assembler code to toggle all the GPIO pins in order to find out where the serial was located on the board. There are 6 banks of GPIO with up to 32 pins each and to discover which GPIO corresponds to a given pin I driven it with a PWM signal having \(\hbox{bank} << 5\, |\, \hbox{id} \) cycles.

This below is the code

I also wrote a program to help me debug the code I was using (I would call it emulator but it simply allocates the memory where to execute the firmware at the same address of the real device and then jumps into it, this is inspired from the work of Travis Goodspeed with the MD380). Obviously you need qemu to emulate the correct ARM architecture in a desktop.

This is the code:

After a couple of bug fixed I was able to look for the GPIOs: I used my oscilloscope to touch each pin exposed on the PCB and finally I find out the pinout of the UART interface: it's located in the connector CN1101 with pin 6, 7, 8 as indicated in picture 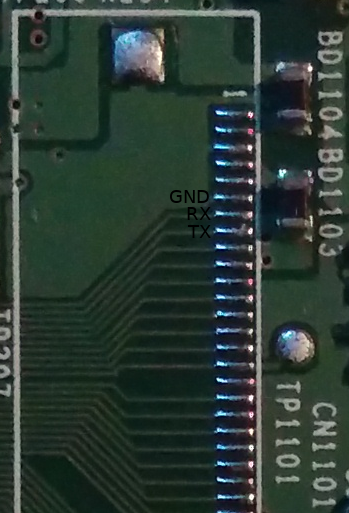 and finally the shell. To my surprise the problem was that the user partition was empty, so simply untarring the update file into the root of the filesystem fixed the problem my friend had. Fortunately it is possible to insert a SD card with the update in it into the device and see it mounted in /media otherwise I would had to upload it using the serial with a my script (but it is very slow).

This wraps up this post: at end I'm very happy of what I obtained and there is space for further work on this device:

If you interested I have a repository with this and a couple of other devices that I analyzed during the years.