Today knowing the technology on which our sites are built is serious business; a thing that you as informed developer must know is the PKI infrastructure that is the web of trust used in the modern internet to guarantee security in the communication.

Following Wikipedia, this is the definition:

A public-key infrastructure (PKI) is a set of hardware, software, people, policies, and procedures needed to create, manage, distribute, use, store, and revoke digital certificates.

In order to understand how the PKI works we must do a step back and tell something about asymmetric cryptography: in this scheme you need two keys to communicate securely contents between parties; if Alice wants to send a message to Bob she uses his public key, encrypts the message and send to Bob. He using his private key can decrypt the message and access the original contents. As the name can make obvious, the public key is public, instead the private key must remain secret.

This works using some pretty awesome properties of prime numbers and in general factorization of integer numbers: indeed this scheme is considered computational secure, not informational secure in the sense that its security is based on a well know hard problem: factorize numbers. If tomorrow a magician could factorize instantaneously a 2048 bits numbers then this scheme will be useless.

The keys are exchangeable in their functionalities: if you use a private key to encrypt a message, you can use its public key to decrypt, because of this they are also useful to demonstrate the authenticity of a digital document: if Alice performs a checksum of her PhD thesis and using her private key encrypts this value, she can send it to Bob that can at this point use the Alice's public key to decrypt the checksum and compare with the checksum of the document in his hands. Bob then knows that the document belongs to Alice.

Asymmetric cryptography therefore can furnish authentication and confidentiality. If you want to give a try to this kind of cryptography, try pgp.

How are used all the crypto stuff in the interwebz? usually they are used by the Secure Socket Layer (also known as Transport Layer Security) that permits to encapsulate an insecure communication channel with a secure one. The more used protocols have their secure version: http has https, imap has imaps etc...

although above we talked about asymmetric encryption, in order to do some crypto during communication, a simmetric cipher is used since is less expensive from a computational point of view: the asymmetric crypto is used in the handshake protocol only to authenticate and to exchange the session key.

Indeed is very important that you are sure you are communicating with the right server and not with someone else (since the evil villain would like to intercept the communication in the middle of the channel, this kind of attack is called man in the middle or mitm); in order to enforce the identity of the endpoint the PKI is used.

the identity of the server is indicated by the subject field (here go things like domain name and email), the issuer field points to the authority that emitted the certificate and the remaining fields are cryptographic infos. The most important is the signature value: it's the checksum of the certificate data (signature excluded) signed with the private key of the issuer; in this way you are sure that the certification authority has really authorized it.

The verification of the identity works as follow: your browser reads the signature value and using the public key in the issuer's certificate verifies it, if they match then the browser verifies the issuer's certificate repeating the process just explained. It's obvious that in theory this process could continue endlessly but in the reality exists, embedded in your browser (mozilla, chromium), a certain numbers of certificates, called root certificates, that are self signed (i.e. are signed using its own private key verifiable with the public key in the same certificate). If during the verification process something breaks then the browser will present you with a message about untrusted transmission. 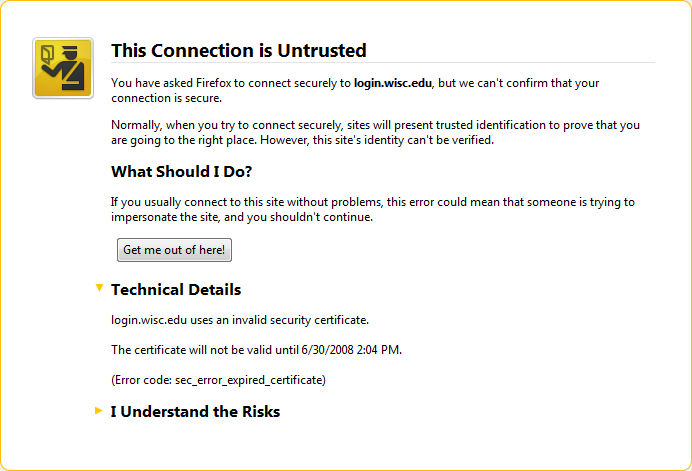 Who emits certificates is called certification authority and has its certificates in the browser as explained just above; they charge people that wants to have this certificates, but someone gives you certificates for free, it's startssl. If you don't need high profile certificates with subdomain and stuffs I advice you to give a try and in this case to follow the instructions below.

First of all you have to create a pair of public/private keys, in this case we are using openssl

This generates the two keys (example.com and example.com.pub) and a certificate signing request (example.com.csr): roughly speaking it's a simple certificate without signature that we are going to submit to startssl in order to have signed with their private key. First of all you have to register, download the certificate that allows you to authenticate to their services and then access the web panel and the certificate wizard tab as shown in the following screenshot 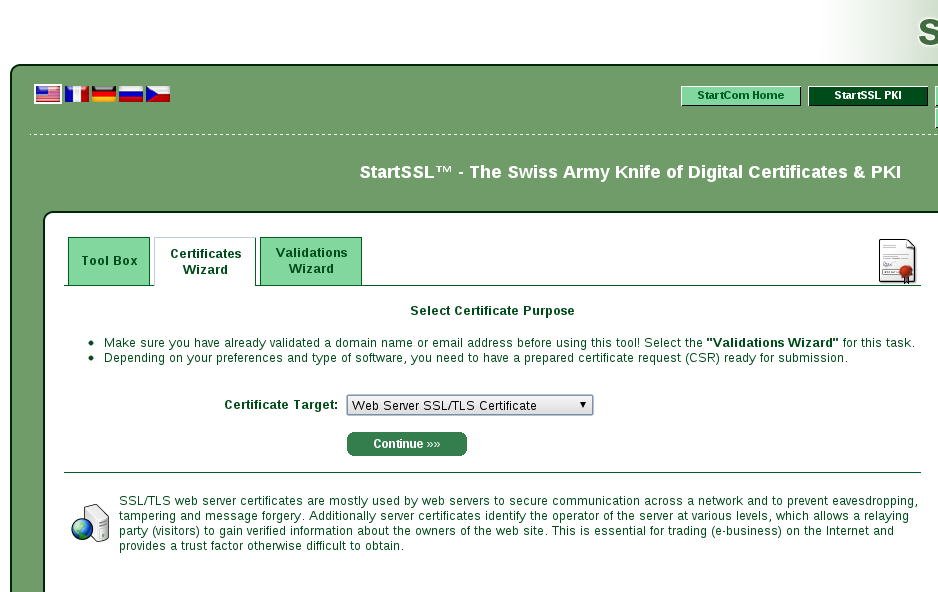 After selecting the Web Server SSL/TLS Certificate from the menu you should see a page where it asks you to generate a private key.

Since we have generate our with openssl we can skip this step and copy the certificate signing request in the next page. 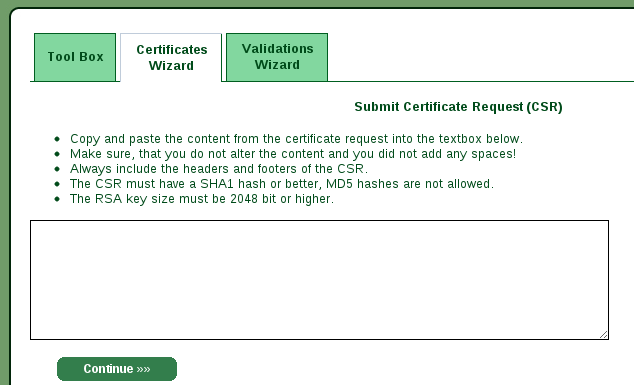 After insert the content of the textarea and submitted you will receive your signed certificate (I skipped two intermediate pages but are not critical for the process explained here). 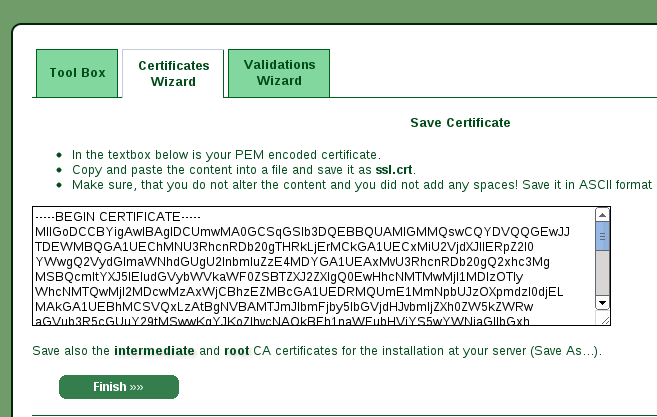 The last step is to donwload the root and intermediate certificates and place it where your server can serve it (for an example of web server configuration with nginx read the link at the end of the post).

Keep in mind that all this certificates stuff are used all over, for example when you develop applications for iPhone you have to sign your code with your own developer certificate issued from Apple and you have to download their root certificate and place it in your keychain. In the device should be present a root certificate that checks the signature on your code if it's authorized from Apple. A lot of problems could be avoided just with the right comprehension of the PKI.

Here some links where you can find more informations